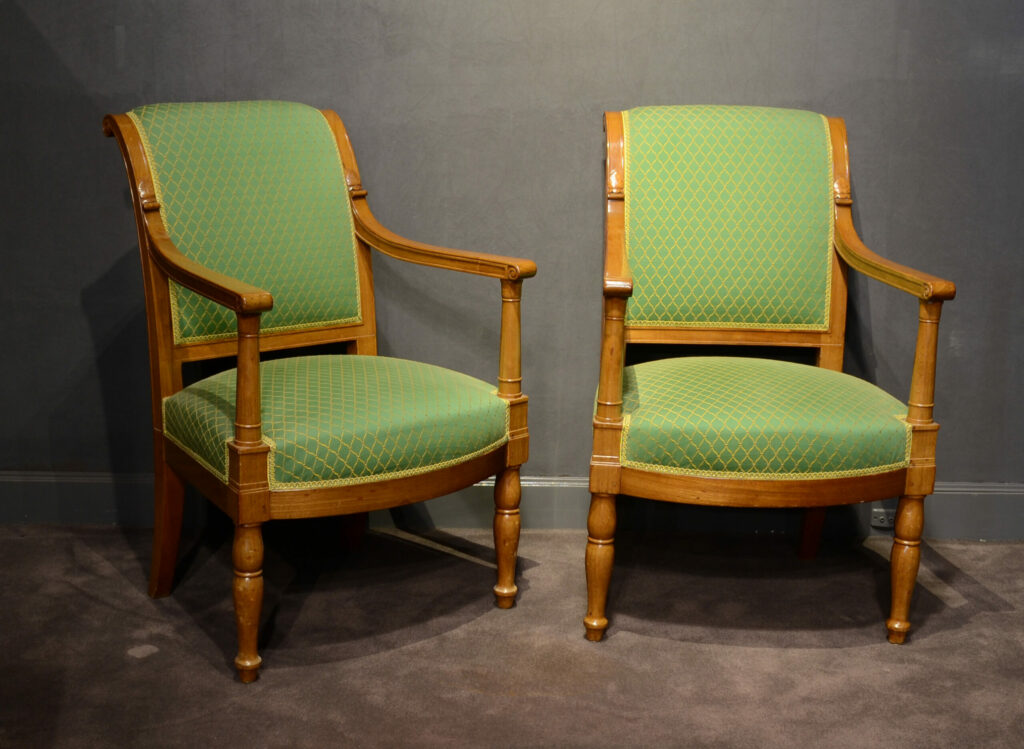 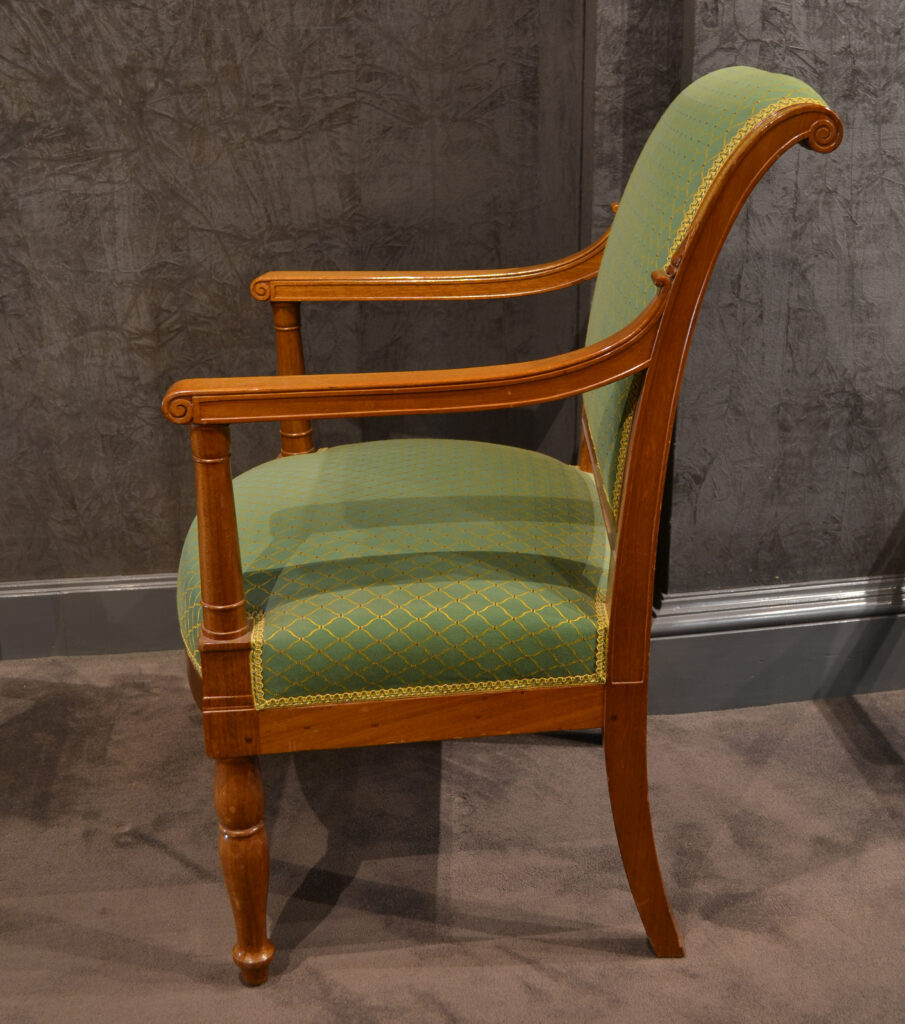 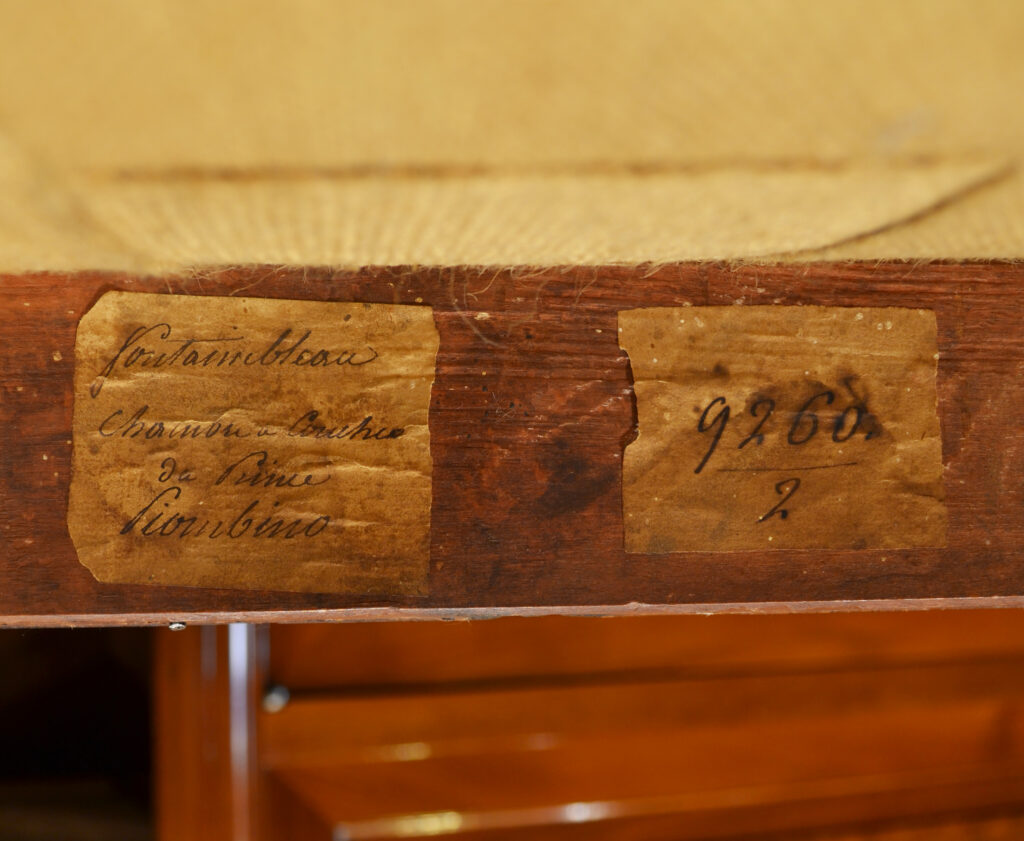 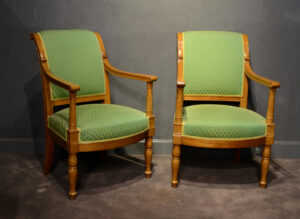 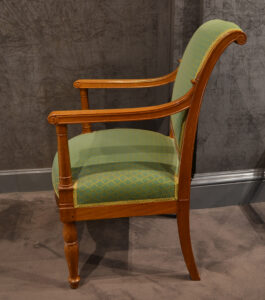 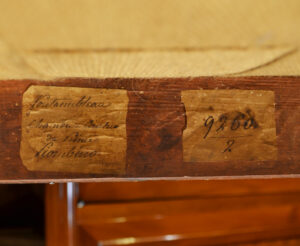 In mahogany, they have a slightly overturned back finished with scrolls.

The armrests are linked to the backrest by delicate carved palmettes, and rest on consoles with cylindrical columns.

Stamped JACOB . D . RUE . MESLEE, they bear the fire mark of the Château de Fontainebleau from the Restoration period and several numbers corresponding to the various inventories of the palace in the 19th century.

The stamp JACOB . D . RUE . MESLEE is used from 1803 to 1813 by Georges Jacob (father) in association with his son François Honoré Georges JACOB, after the death of Georges II JACOB.

Hector Lefuel publishes in François-Honoré-Georges Jacob-Desmalter, cabinetmaker to Napoleon I and Louis XVIII, Paris, 1925, page 254, Jacob’s memorandum of 31 October 1806 concerning the delivery for:

“…Bedroom of the Prince of Piombino

-Two mahogany armchairs, cross backs, the uprights of the backs decorated with flat bottoms, the straight armrests finished with a small scroll, the front legs turned as well as the console supporting the armrest, at 48fr. = 96…”.

The armchairs were accompanied by a bergère, a footstool and a screen of mantelpieces also in mahogany.

The Mobilier National ownes fragments of a gourgouran, delivered by Cartier Frères for this piece in 1806. This gourgouran was accompanied by a black velvet border on a lilac satin background with a white border (Soieries de Lyon, commandes impériales, exhibition at the Musée historique des tissus in Lyon, 1982-83, n°18 p. 42 and n°77 p.65). 42 and n°77 p.65).