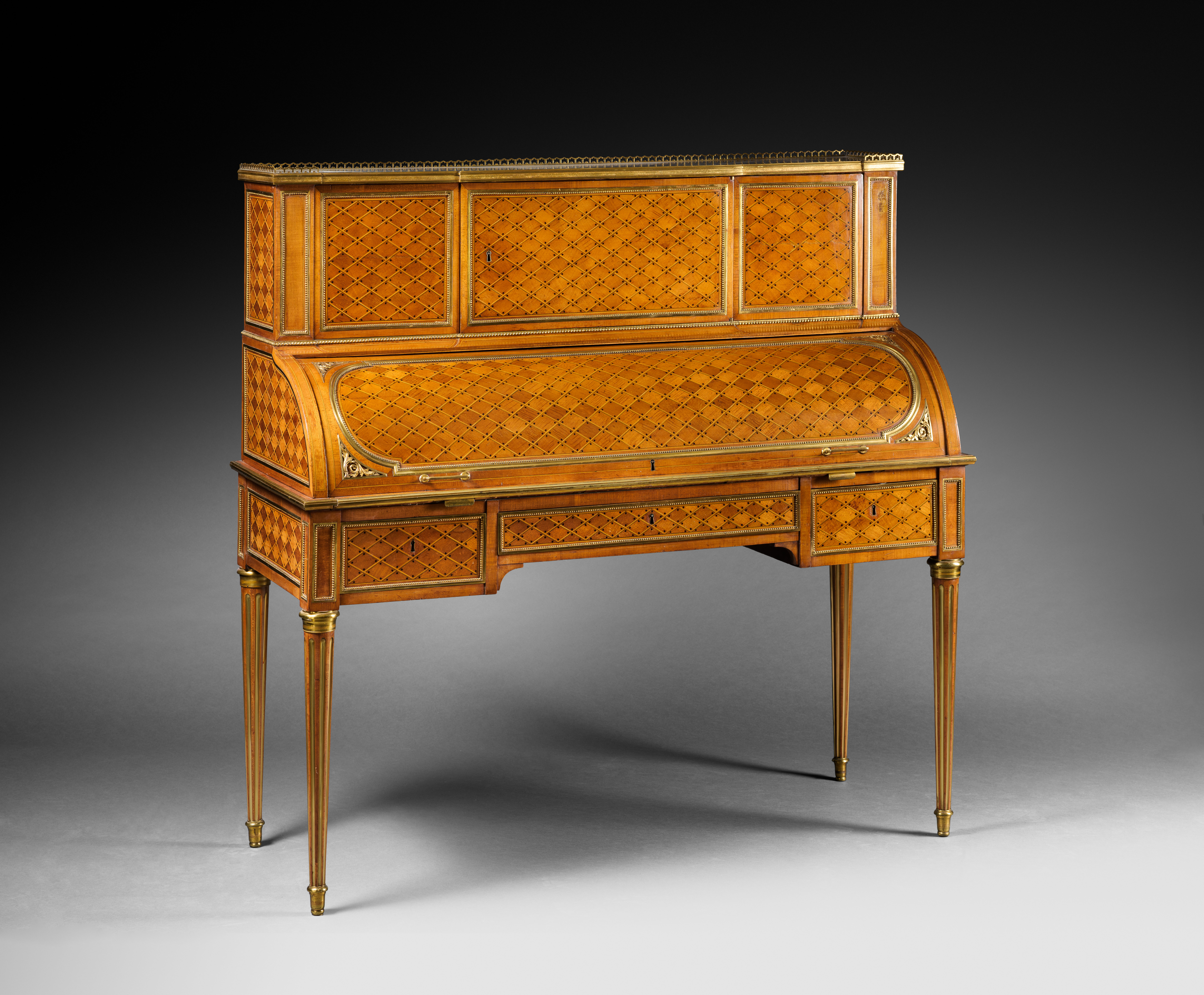 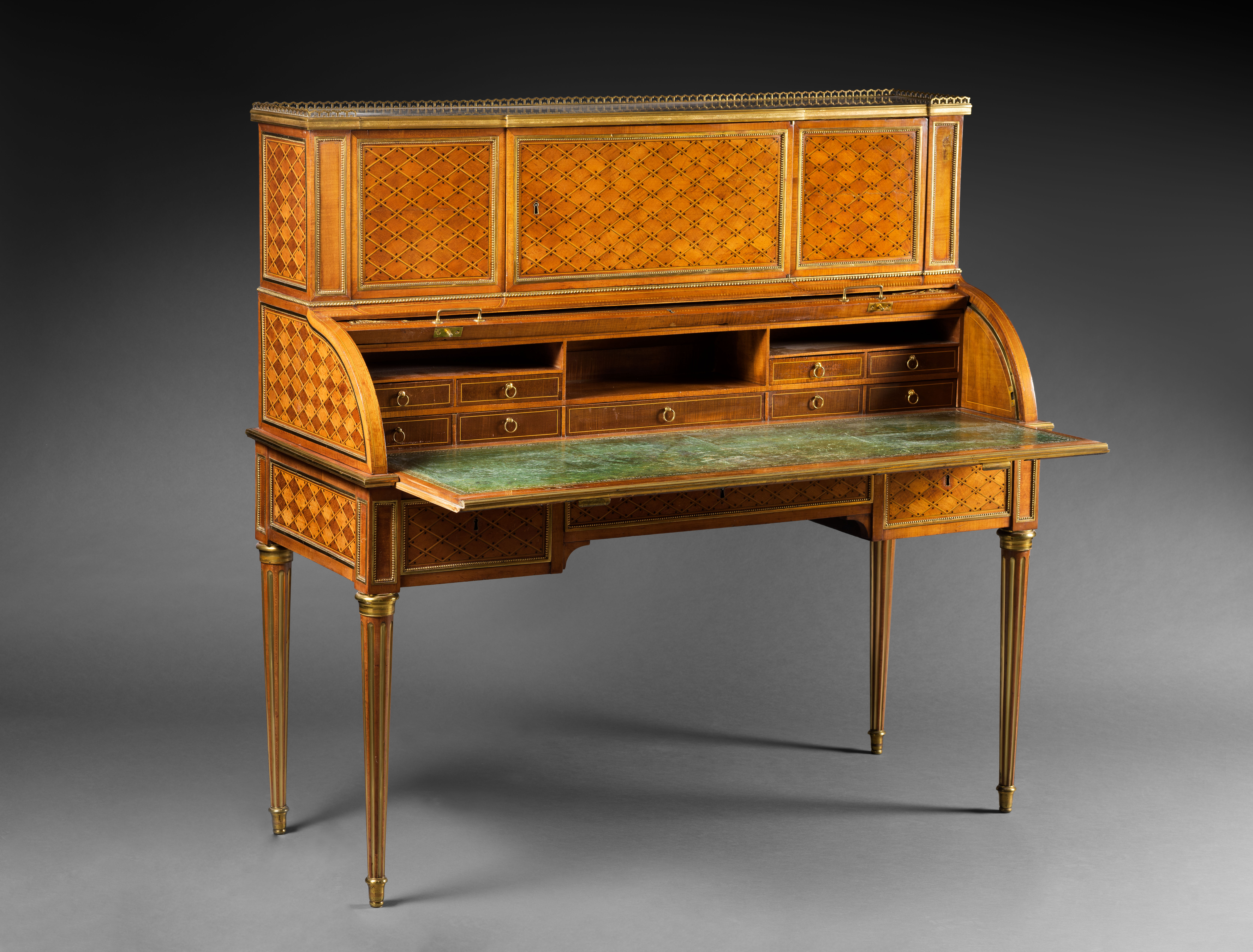 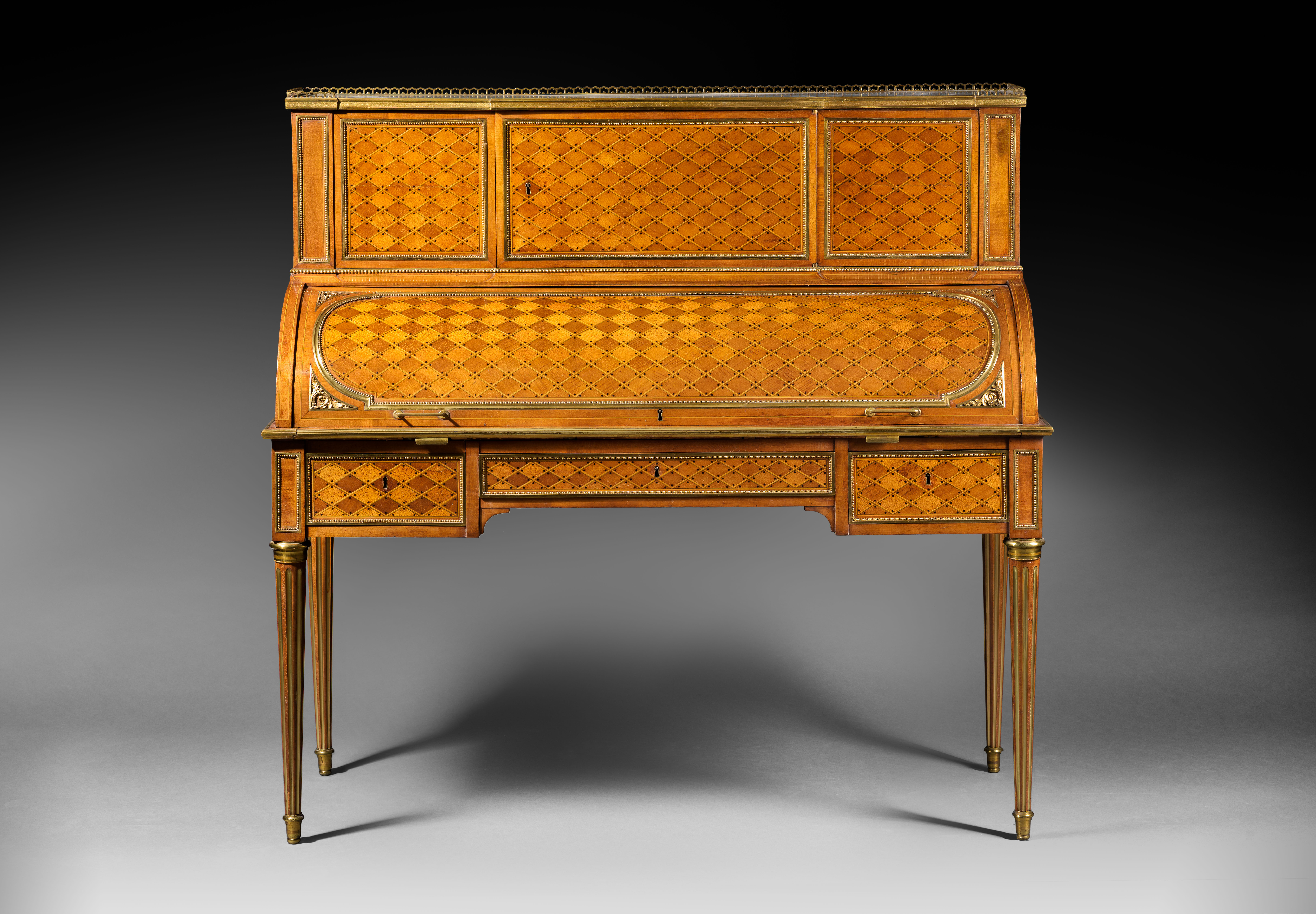 An important Louis XVI  cylinder desk attributed to Adam Weisweiler, veneered with sycamore compartments inlaid with sycamore lozenges in a latticework of three nets (boxwood, green stained wood and ebony) and enhanced with ebony pastilles. The desk rests on four tapered legs with brass flutes, ending in turned hooves topped with rings. The front of the belt has three drawers above which is a cylinder decorated with an oblong compartment framed by gilt bronze leafy spandrels. The open cylinder reveals a leather-covered sliding tray that gives access to an additional row of small drawers. At the top there is a similarly ornate box, opening with hinged doors, the interior is veneered with plain sycamore in filleted frames. Each marquetry compartment is framed with gilt bronze beaded mouldings. The top is lined with a grey and white veined marble framed by an openwork gallery.

Although not stamped, this piece of furniture shows all the characteristics of a great workshop. This marquetry was used by several of the most illustrious names in cabinet making of the Louis XVI period. Riesener decorated several of his pieces of furniture with trellises on the same sycamore background, but without the black pastilles. Carlin covered his trough tables with an identical decoration. But it is above all the production of Adam Weisweiler that our piece of furniture comes closest to (see the famous table in steel and Japanese lacquer, delivered to the Queen in 1784 for Saint Cloud and now in the Louvre, the interior of which is entirely decorated with this marquetry). Indeed, unlike his renowned colleagues, Weisweiler sometimes mounted his furniture with very simple bronzes. The small cylinder desk in lemonwood illustrated in Kjellberg, Pierre, Le Mobilier français du XVIIIème siècle, Paris, 1989, p. 870, which also has an upper case, has identical handles on the cylinder. Many of Weisweiler’s pieces of furniture also have feet whose flutes are decorated with brass.
Finally, a cabinet secretary stamped by the master and illustrated by Alexandre Pradère (Les Ebénistes français de Louis XIV à la Révolution, 1989, p395), seems to be a continuation of our desk as their elements are so similar.

Writing table made by Adam Weisweiler and delivered by Daguerre to Marie-Antoinette for Saint-Cloud in 1784. Musée du Louvre, Paris. (Detail)

Adam Weisweiler, master in 1778, worked a lot for the merchant Daguerre, who specialised in the most expensive furniture and objects and catered to a select clientele eager for novelty. Weisweiler designed very luxurious furniture, covered with porcelain, lacquer or hard stone, but also with more sober cabinetwork, plain veneers or marquetry, which are then enhanced with sober but delicate ornamentation in gilded bronze.

Underneath the marble, the furniture is stamped ‘E.H.B.’, for Edward Holmes Baldock (1777-1845), ‘Purveyor of China, Earthenware and Glass to William IV’ (1832-37) and ‘Purveyor of China to Queen Victoria’ (1838-45). A prominent figure in the antiques trade, his name is associated with some of the most important collections of early 19th century French furniture in England, including those of King George IV, the Dukes of Buccleuch and Northumberland, and William Beckford.